The word "Springburn" appears to date from between the 1820s and 1830s. It certainly did not appear on the map of the area prepared in 1822 by James Cleland nor does the map indicate the presence of a village in that year. 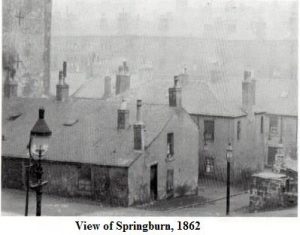 The name "Springburn" is obviously descriptive and suggests local physical features and the presence of a burn now thought to have been located at the present day junction of Cowlair's Road into Springburn Road. No trace of spring or burn remains. It is also probable that the spring originated somewhere on the slopes that were later to be Wellfield Street and in the neighbourhood of which were situated from atleast the 16th century the mansion and clachan of Balgray. It's waters flowed along the base of the hill and across by the western end of what later became known as Cowlair's Road by the farm of Springvale, a name that originated in the 18th century.

The topography of the area is characterised chiefly by its many hills. The area can be said to be consistently hilly and can boast of having the distinction of being the highest location within the City of Glasgow. Hence the phrase, the "Alpine District" of the city. Modern place names express the same characteristic -"Sighthill", "Petershill", "Barnhill" with Springburn Hill immediately behind and Keppochhill to the west while lying to the east and north are the heights about Balornock, Balgrayhill and Stobhill. 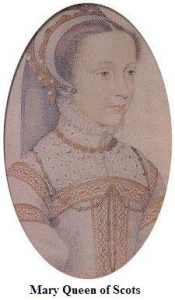 Mary Queen of Scots is though to have resided for a brief period within the prebend when she came to Glasgow in 1567. 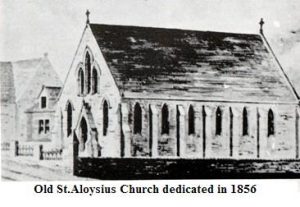 A new church, in the Gothic style, capable of accomodating 500 people, was begun in 1855 to provide for the needs of the Catholics of Springburn and northern suburbs of Glasgow. On Sunday, 22nd June 1856, the first church of St. Aloysius was solemly blessed and opened for divine service. History was made that day in Springburn. 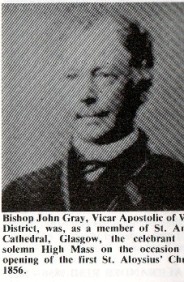 The celebrant of the High Mass was the Rev. John Gray, St. Andrew's Cathedral, with the Rev. Alex Reid, the new pastor of Springburn as deacon and the Rev. David MacDonald, St. Mary's College, Blairs, as sub-deacon. Bishop John Murdoch, Vicar Apostolic of the Western District, who dedicated the church, delivered the homily "an able and eloquent development of the stability and propagation of the faith amid the most appalling persecutions during the earlier ages of the Church". 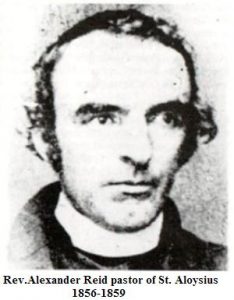 The first rector of the new St. Aloysius Church, Rev. Alexander Reid, was born in Aberdeen, 15th February 1828. He studied at Ratisbon(1838) and St. Mary's, Blairs(1844) and was ordained priest 3rd December, 1850. He served at St. Andrew's Cathedral, Glasgow, St.Joseph's, Stranraer and St. Joseph's, (North Woodside Road), Glasgow, before being given charge of St. Aloysius in 1856 in succession to Father Dugald McDonald. His stay in Springburn was short, lasting a mere three years.

In 1859, he returned to St. Andrew's Cathedral, where he remained untill 1865. The struggling parish of the Sacred Hearts of Jesus and Mary, Girvan, Ayrshire, was the next scene of his labours, 1865-1871. From there he was transferred to the comparatively recently established parish of St. Joseph, Helensburgh, 1871-1874. He lived there privately in Fort William before going to Germany in 1876. There he died at the early age of 51 in Wurzburg, Bavaria in 1879.

When the Rev.Alexander Reid left Springburn in 1859 for St. Andrew's Cathedral, his place was taken by the Rev. Patrick Hanley, who came from St. Patrick's, Anderston. He was born in Limerick in 1818, was a student at Maynooth College, and haviing volunteered for missionary work in Scotland, was ordained by Bishop John Murdoch in St. Andrew's Cathedral, 1842.

Father Hanley was a man of vast experience of parish work and during the next seven years in Springburn, the infant parish thrived and prospered, already showing signs of the great parish it was to become. There were then about 1600 Catholics in the district of Springburn, including the villages of Bishopbriggs and Old Auchinairn, which were part of the parish. Father Hanley provided for a larger school to suit the needs of the growing numbers of children.

Father Hanley remained in Springburn untill 3rd May, 1865 when he was transferred to St. John the Baptist's, Port Glasgow. Ill-health forced him to retire on 6th November, 1872 and he went to reside at 144 Duke Street, Leith where he died suddenly on 4th June 1880. 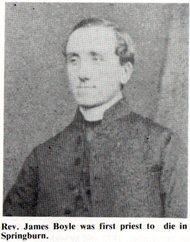 Father Hanley was succeeded in May 1865 at St. Aloysius by Rev. James Boyle, who was was succeeded by Father James Conway. Both of them came from St. Patrick's, Anderston. During Father James Boyle's short tenure at Springburn office, he had acquired ground adjoining the church for the erection of a new school and gradually the parish was crystallized into what it looks today. 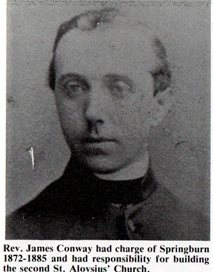 Father James Conway too had great experience of parochial work in Airdrie and Paisley, and St. Patrick's Anderston, before coming to St. Aloysius, where he was to remain for twelve years, during which time there were great changes in the parish. 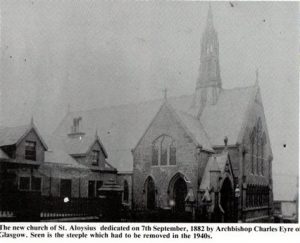 Father James Conway's pastorate was also to see the building of a new church- the second St. Aloysius. The Catholic Directory for Scotland for 1883 provides a full account:

"On 7th September, 1882, a new church was solemly opened here by Archbishop Eyre. Designed in the early decorated style of Gothic architecture, it stands in the site of a smaller one built twenty-six years ago, but latterly found too small for the needs of the congregation. Internally, the building is divided into three roomy aisles having open timber roofs, the centre clustered columns with moulded caps. Towards the south end the aisles are marked by short transepts, the one to the east containing the organ chamber and the baptistery (the latter situated in a small semi-octagon) while the one to the west contains the main entrances and the stair to the organ gallery". 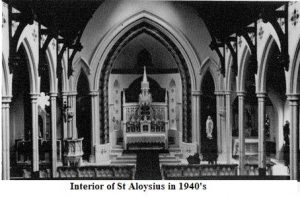 "The south or main entrance is a very rich piece of work, with arched stone ceiling, its inner and outer arches richly shafted, moulded and carved. The latter is filled with an ornamental iron gate, while the tympanum of the gable over it is relieved by a carved panel representing St. Aloysius, the patron of the church.The street end of the centre aisle is terminated by a lofty gable, surmounted by a cross, which, rising to a height of sixty feet above the road, forms the central feature of this elevation, its mass being relieved by a large shafted and cusped three-light lancet window.

"The intersection of the transepts and main roof is emphasised by a pinnacle fleche, terminated by a cross, the whole rising to a height of 100 feet. This fleche forms the ventilation-shaft, and will also be used as a bell-turret. The western aisle is terminated by the sacristy, its upper wall being pierced by a rose-window; and in the eastern aisle is placed the Lady Chapel and altar, the latter, together with two stained glass windows there, having been presented by the present incumbent and his brother, Rev. D. Conway, of Port Glasgow".

"The building which has accomodation for 1000 persons, was erected at a cost of about 3000 pounds and the whole work was carried out from the designs and under the supervision of Messrs. At the opening service there was a very large attendance of clergy and laity. High Mass, coram Archiepiscopo, was celebrated by the Rev.A. Munro, D.D., and Father Tom Burke, O.P.,preached the sermon." 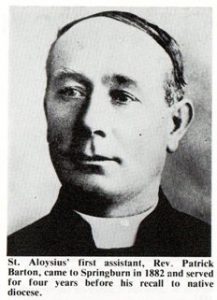 As well as getting its new church in 1882, Springburn got its first curate. He was Rev. Patrick Barton. Born 14th August, 1857 in Lixnaw, Co.Kerry, he was ordained at Maynooth on 25th June, 1882 for Kerry and was sent on loan to Glasgow archdiocese. He served at St. Aloysius 1882-1886 when he was recalled to native diocese. Later he became parish priest of Ardfert, Co.Kerry for 30 years.

The original St. ALoysius Church was built in 1856. The growth of the Catholic community in Springburn was caused by Catholic people moving down to Glasgow from the Highlands of Scotland and from Ireland, so they needed a church. The original St. Aloysius had a steeple. In 1882 it was decided to built a newer church without a steeple. This is the present St. Aloysius. 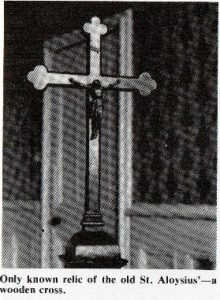 By 1930s right through till 1980s, St. Aloysius was a huge parish with up to 4 priests. With the decline in industry, many people moved away from Springburn. Coupled with the shortage of priests, the parish is a shadow of its former glory. However, sometimes small is beautiful and we have a fine enthusiastic parish which, please God, will survive well into the future.